The Cry of the Earth: A Call to Action for Climate Justice 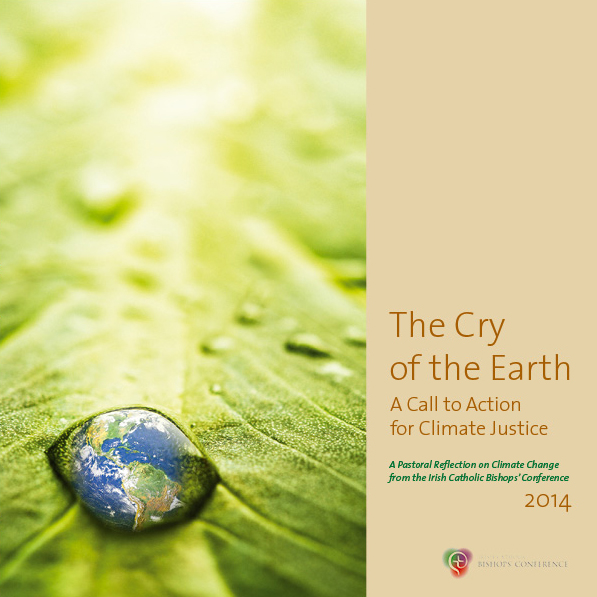 “And God saw everything that God made, and behold, it was very good.” – Genesis 1:30

In 2009 the Irish Bishops’ Conference published the pastoral reflection The Cry of the Earth with the aim of stimulating and resourcing dialogue and reflection on the critical questions posed by the challenge of climate change. The reflection was inspired by Pope Emeritus Benedict XVI’s Encyclical Letter Caritas in Veritate, published earlier that year. Caritas in Veritate  emphasised that the ‘environment is God’s gift to everyone, and in our use of it we have a responsibility towards the poor, towards future generations and towards humanity as a whole.’

On the role of the Church, Pope Benedict stated: ‘The Church has a responsibility towards creation and she must assert this responsibility in the public sphere’ (nn. 48 and 51). Accordingly, in The Cry of the Earth individuals, parish communities and all people of good will were invited to reflect on ‘that covenant between human beings and the environment, which should mirror the creative love of God, from whom we come and towards whom we are journeying’ (n. 50).

This pastoral reflection proved to be a valuable tool for those who are concerned about the impact of climate change and want to take action to address its negative consequences.

As more and more people in our society are becoming aware of the unjust impact of climate change on some of the most vulnerable communities in our world, The Cry of the Earth has now been updated 2014, with supporting resources for dialogue at parish level, with a new title – The Cry of the Earth: A Call to Action for Climate Justice. 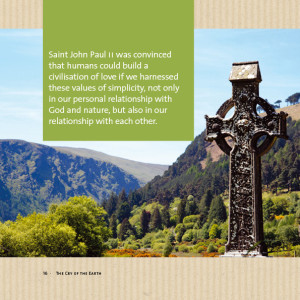 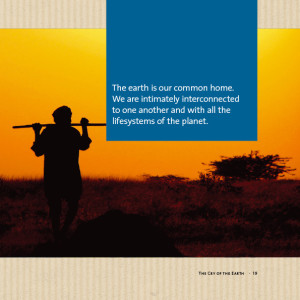 The Cry of the Earth: A Call to Action for Climate Justice

The first part of this pastoral reflection helps us to inform ourselves by examining the science associated with climate change. It includes analysis from international groups of scientists such as the UN Intergovernmental Panel on Climate Change, the Environmental Protection Agency of Ireland and the experts on climate change we have consulted in Ireland. An overwhelming consensus exists among credible national and international organisations working in this area. The precautionary principal means that we should react now to the risk of serious harm posed by the plausible link between certain types of human activity and the damaging effects of climate change.

The second part of this reflection sees our natural environment as ‘a wondrous work of the Creator containing a “grammar” which sets forth … Criteria for its wise use, not its reckless exploitation’ (n. 48). It offers such reflections on sacred scripture, key ethical principles and themes from Catholic Social Doctrine. They inspire and guide our vocation as stewards of God’s creation. While scientific knowledge is constantly evolving, the principles that inform our approach, as Christians, to these developments remain steadfast, rooted in our faith. Finally, this pastoral reflection offers some practical actions. The lifestyle individuals, parishes and others adopt can reduce the impact of many of our day-to-day activities on our natural environment and, consequently, on our global climate.

In addressing the challenge of climate change, everyone has a part to play. Every action taken in favour of a just and more sustainable environment, no matter how small, has an intrinsic value. Action at a global level, as well as every individual action which contributes to integral human development and global solidarity, helps to construct a more sustainable environment and, therefore, a better world.

In 2009 Pope Emeritus Benedict XVI called contemporary society to a serious review of its lifestyle, which, in many parts of the world, is prone to hedonism and consumerism, regardless of their harmful consequences. What is needed is an effective shift in mentality which can lead to the adoption of ‘new lifestyles’ in which the quest for truth, beauty, goodness and communion with others for the sake of common growth are the factors which determine consumer choices, savings and investments. (n. 51)

This sentiment was echoed by Pope Francis in his 2013 Pastoral Exhortation Evangelii Gaudium, in which he defines solidarity as ‘the creation of a new mind-set which thinks in terms of community and the priority of the life of all over the appropriation of goods by a few’ (n. 188).

Grateful to God for the gift of his creation, the bishops encourage all people of goodwill to reflect urgently on how we can work together to take more responsible care of our planet now and for the sake of generations yet unborn. They deserve no less of us. 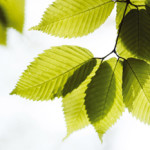 GLAS – a pastoral resource for parishes to supplement The Cry of the Earth: A Call to Action for Climate Justice – click here

Article by Éamonn Meehan from September 2014 issue of Intercom Magazine: Hearing the Cry of the Earth

Articles and information on climate change from Trócaire, the Overseas Development Agency of the Catholic Church – click here 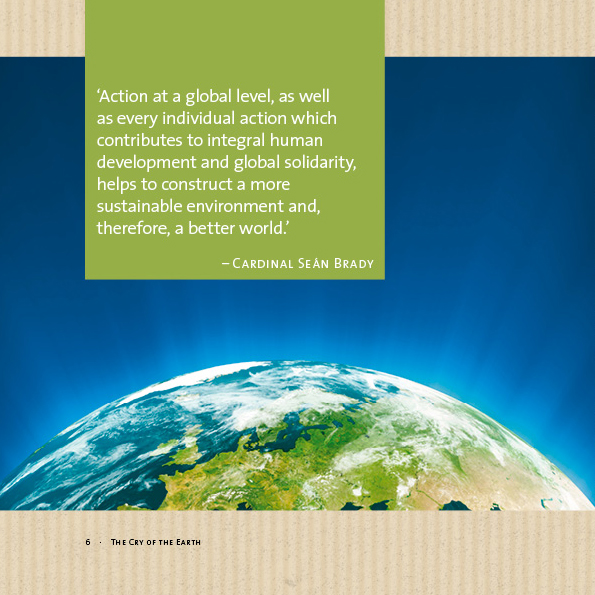 The Holy See: committed to working against climate change
Vatican City, 24 September 2014 (VIS) – Cardinal Secretary of State Pietro Parolin spoke at the Climate Summit held in New York, U.S.A. yesterday afternoon. Faced with the great risks and socio-economic costs of inertia in relation to this problem, he remarked, “prudence must prevail, which requires thoughtful deliberations based on an accurate analysis of the impact our actions will have on the future. This requires a great political and economic commitment on the part of the international community, to which the Holy See wishes to make its own contribution, being aware that ‘the gift of knowledge helps us not to fall into attitudes of excess or error’”.

The cardinal went on to emphasise the responsibility of States “to protect the world climate by means of mitigation and adaptation measures, as well as by sharing technologies and ‘know-how’. But above all they have a shared responsibility to protect our planet and the human family, ensuring present and future generations have the possibility of living in a safe and worthy environment”. He also mentioned the efforts made by Vatican City State to reduce the consumption of fossil fuels through diversification and energy efficiency projects, but added that “talking about emission reductions is useless if we are not ready to change our lifestyle and the current dominant models of consumption and production”. The Holy See, he concluded, “commits itself to this end, so that in this work the international community may be guided by the ethical imperative to act, inspired by the principles of solidarity and the promotion of the common good, in the knowledge that ‘the dignity of each human person and the pursuit of the common good are concerns which ought to shape all economic policies’”.

Raphoe Justice and Peace Group and Eco-congregation Ireland have invited Professor John Sweeney, Maynooth University, to deliver a talk on Friday 13 February 2015 at 7.30pm in the Regional Cultural Centre in Letterkenny, Co Donegal . After the talk, there will be Question and Answer session which will give members of the public an opportunity to engage in conversation with Professor John Sweeney about Climate Change issues.