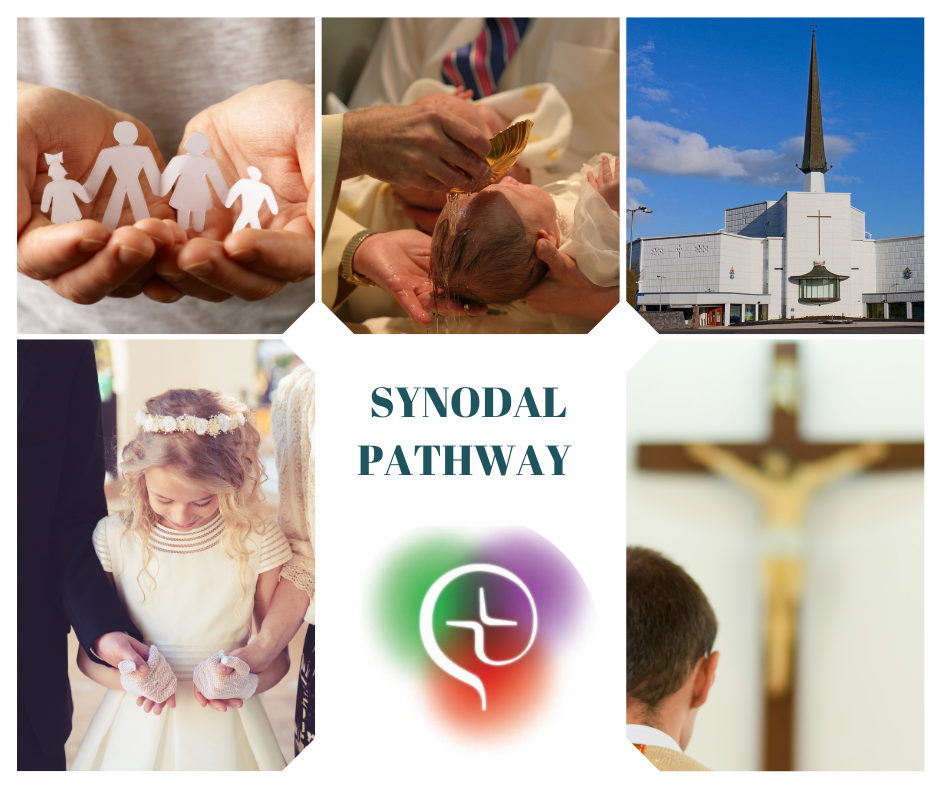 Please find below the responses to some frequently asked questions on the synodal pathway:

What is a Synod?

The word “synod” evokes the image of “walking together on the way”.  For the Church it is a time-honoured way of working out together the “navigation map” for the Church at particular times.  Synodality is about the whole People of God helping each other listen to what the Holy Spirit is saying to the Church.  Pope Francis emphasises that this is not simply a matter of discussion as in a parliamentary debate.  Rather it is primarily a prayerful spiritual time of communitarian discernment.  It is about finding the best ways for every baptized person to fulfil the Church’s mission of proclaiming to the world, God’s love and salvation in Jesus Christ.

Pope Francis has emphasised that “it is precisely this path of synodality which God expects of the Church of the third millennium”.  Synodality is at the heart of the pastoral conversion that Pope Francis emphasises in the Joy of the Gospel (Evangelii Gaudium).

When will the Synodal Assembly take place?

The journey towards a more synodal Irish Church begins now. But preparing ourselves to think and act synodally cannot happen overnight. A Synodal Assembly without a synodal preparation risks being merely a parliament of competing voices.

The process that is currently proposed is as follows:

The initial two-year phase of embarking on the synodal pathway and leading, in time, to a National Synodal Assembly, helpfully coincides with preparation for the 2023 Ordinary General Assembly of Bishops in Rome entitled, For a synodal Church: communion, participation and mission.

The next two years (2021 – 2023) will be a period of prayer, listening and discernment, involving a nationwide consultative conversation on this theme.  This will allow individuals and parishes, religious orders and associations as well as groups, movements and organisations both within the Church and in Irish society at large, to share their insights into the Church in Ireland – past, present and future.  It will also include discussion and debate via related information sessions and educational programmes on the meaning and processes of synodality.   Best practice in listening and synodal processes and assemblies at home and around the world will be researched.

The Planning Phase – Preparation for a National Synodal Assembly

A Steering Committee and a Task Group have been established to plan and oversee the first steps along the synodal pathway.  These two groups are made up of lay women and men, including young people, religious, priests and bishops.

We encourage reflection, study and research on the theme of synodality at parish, diocesan, regional and national level and we invite writers, theologians and lecturers to prepare papers for sharing and discussion in the initial two-year phase.

The key question is: What does God want from the Church in Ireland at this time?

Who attends a Synodal Assembly?

Synodal processes have been adopted by parishes and dioceses around the country for the past 20 to 30 years where consultation and collaboration between the lay faithful, priests and bishops have been modelled. This, however, is the first time that there will be a National Synodal Process and Assembly in Ireland that will involve more than just the bishops. In effect the Synodal Process has begun already and while many people may look to the gathering in the future as the high point it is important to remember that the process will continue long after that event.

It is too early yet in the process to identify exactly who will be present at the Synodal Assembly in five years’ time. There will, however, be three main groups of people at the gathering: Members, Advisers, and Observers.

A full participant at the Synodal Assembly will be called a “member” as it reflects the canonical status of those called to a Council. It also reminds us that those who are present as members are there to represent the People of God on the island of Ireland. They are not there to represent specific regions or groups. If the need to vote arises members are the only people who can do so at a Synodal Assembly.

The members of the Synodal Assembly are those who have been elected/selected to participate. Some of the members are people who “must” be called to an Assembly of this nature such as the Bishops, leaders of Religious Orders, Seminary Rectors and Heads of Theological Institutions. Others are people who will be called through a range of processes across the country. They will represent lay faithful and clergy from each diocese on the island as well as members of various Catholic organisations and groups. The initial two years of discernment will allow groups to come forward and present their case for membership of the Synodal Assembly. The approximate number of members at the Synodal Assembly will be decided after consultation at a later date. To give us, however, an indication of approximate membership, we can note that the Plenary Council of the Australian Catholic Church, due to be held over two sessions in October 2021 and July 2022, has a total of 280 members.

The advisors to the Synodal Assembly will be people with knowledge and expertise across a range of matters, such as theology, Scripture, governance, formation, ecclesiology (study of the Church), Canon Law etc. who can be called upon by members to provide advice on particular matters to assist with their discernment and decision-making.

Observers are people who attend the Synodal Assembly and observe the proceedings. They may be asked to address the gathering or make a written submission. Like all other major Church gatherings, the observers will include representatives from other Christian denominations and religions on the island as well as Catholic leaders from other parts of the world, particularly Scotland, England and Wales. The observers may attend some or all of the sessions as they wish.

As stated above most of the membership will be discerned and selected over time. Everyone, however, will be welcome, and encouraged, to take part in the listening process in the lead up to the Synodal Assembly. These listening sessions and conversations will determine the Instrumentum Laboris (The Working Document) and the agenda for the assembly.

Pope Benedict XVI, in an address to Pastoral Leaders in 2009, said that “They must no longer be viewed as “collaborators” of the clergy but truly recognized as “co-responsible” for the Church’s being and action…”  This model of “co-responsibility” has continued under the leadership of Pope Francis where he has encouraged the Church to be synodal in its approach.

Much has been said of the model of synodality being that of a “walking together” in a process of discernment, reflection and prayer trying to discover what God wants of the Church at this time.  However, the question arises as to whether a Synodal Assembly can actually change Church teaching?  Pope Francis has been clear that Synods are not instruments to change Church teaching but rather help to apply Church teaching more pastorally.

Have there been synods in Ireland in the past?

Although there were earlier synods held in Ireland, perhaps the most well-known of the medieval synods were those of Cashel (1101), Ráith Bressail (1111) and Kells-Mellifont (1152). These laid the foundations for both the reform of the Church in Ireland – asserting papal and episcopal authority and tackling issues such as simony, hereditary clerical dynasties and clerical concubinage – and the establishment of the diocesan system. There were, in fact, at least twelve national or provincial synods held between the years 1101 to 1179, many of which we know little about.

Click here to read more on the history of synods in Ireland.

Have Synodal Assemblies taken place elsewhere in the world?

Yes. Synodal Assemblies form part of the contemporary experience of Church in many places of the world. In recent years, at a local level, a number of dioceses in Ireland and many dioceses throughout the world have held diocesan assemblies or synods.

What does it mean for the Catholic Church in Ireland to embark on a synodal pathway?

It means walking together on our pilgrim way in faith towards God, conscious of our God-given gifts. Essentially, it is listening intently to each other.  We are then called to engage in reflecting and praying together about what we are hearing.  We journey in this way to allow the Holy Spirit to guide us in our mission of proclaiming the Gospel of Jesus Christ in Ireland and beyond.