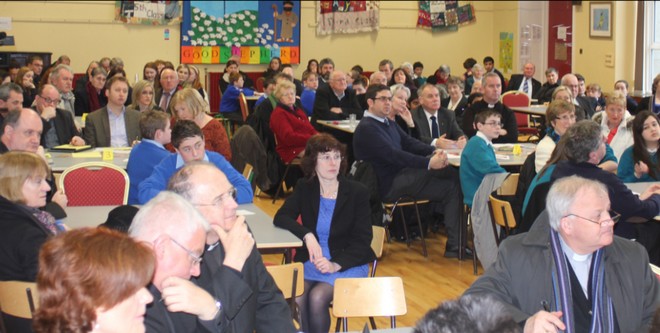 As schools celebrate and reflect on their identity and future in Irish society there is much to be grateful for and there are many challenges facing schools and those responsible for education in Ireland. Catholic schools have a long and noble tradition and have made a significant contribution to educating young people in Ireland. The Catholic Church is committed to its role in education and will provide schools in response to the needs of parents.

The State in Ireland is committed to diversity in education and in particular to the provision of denominational education at primary and secondary level.  In 2011 the Minister for Education and Skills established a Forum on Patronage and Pluralism in the Primary Sector to consider how school patronage might reflect the needs of parents in Ireland today. As a result it was decided to survey parents to ascertain their views. It is of the utmost importance that an accurate outcome is achieved so that the Patrons and the State can respond with appropriate provision.

Giving life to the Catholic ethos is a concern for all associated with our schools. It is first and foremost an issue for individual schools. Catholic schools are required to show respect for the person made in the image of God, to have commitment to justice, to set aside time for prayer and reflection, to be open and welcoming to all, to be characterised by respect for the tradition of Catholic education, to seek renewal of that tradition in responding to current realities, to nurture a relationship with Jesus Christ and to have a love for knowledge.

Catholic schools seek assurances from the State which has publicly acknowledged its commitment to denominational education for those who wish to have their children educated in faith-based schools. The government has indicated there is no plan to impose a secular system of education.    It is essential at this point that the State gives a commitment to the effect that faith-based schools will be given adequate guarantees to ensure that such education will be provided into the future.

Good and respectful relationships exist between Church and State in relation to education provision in this island. The patronage system which has served us well requires now that all involved respond to the needs of increased diversity and significant minorities in the population. The Forum was an innovative first step but it will not solve all the contentious issues in providing for the education of our people. This can only be done following a clear determination of the wishes of the people and a guarantee that the ethos of schools under the varying forms of patronage is guaranteed and protected into the future.

Catholic schools require teachers professionally trained to teach and form young people in the Catholic faith. There is a strong public interest and particularly among Catholic parents in the provision of appropriate training for such teachers. In the light of recent reports and developments the Irish Catholic Bishops have made clear their support for denominational third-level colleges. Recently they stated: “Given the commitment of the State to diversity in education and in particular to the provision of denominational education at primary and secondary level there is a strong public interest in the provision of appropriate training for teachers in these institutions.” They also stated that: “….they look forward to a continuing dynamic role for denominational Colleges of Education into the future whereby their autonomy is respected and appropriate funding is provided.”

Most Reverend Brendan Kelly, Chairman, Council for Education of the Irish Bishops Conference.

how to get my ex boyfriend back

This article appeared in The Irish Times as the Rite and Reason column on Tuesday 29 January 2013.